By T
/ in Belly talk Shop
No comments 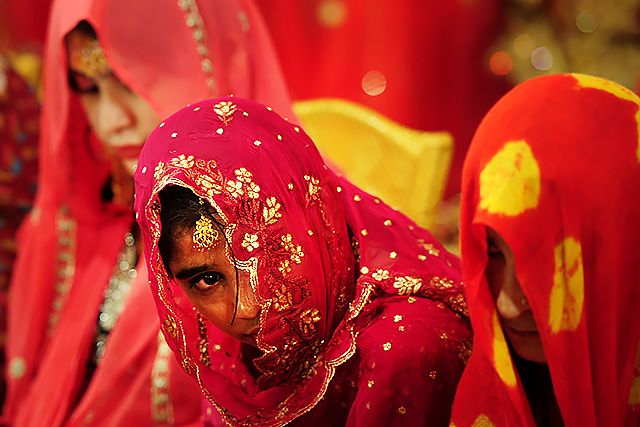 Growing up in Morocco, I had a father who wanted me married at the age of 8! My life was a continuous struggle dealing about the doubts and fears of being forced to get married. My summer vacation was filled with fear. I hated summer because it was the end of the school year and the start of the "marriage discussion" in our household. I remember the violent arguments in our house at the end of every school year when my dad start to make a list of the illiterate idiots in our Berber Village that could be suited to marry me or my sister. I wanted the school year to never end so I don't have to deal with these arguments and fights. The beginning of every school year was equally scary as I never knew whether I will be allowed to go back to school this year or not. Every year was the same argument and the same fight. A year after year until I was about 15 and in high school when my dad gave up because I was too old and too "educated for any man to want to marry me"! Basically I was damaged goods and therefore will never get married! This was my life and is still the life of millions of girls around the world. One that we in the West just write articles about once in awhile but not one many relate to on a deep level like I did. It is also a private family matter that we hardly get to witness when it takes place so we cannot point at it and show the world how fucked up it is. It is also a "private family matter" embedded in a long history that many countries don't dare changing by law because it will torment the social and religious systems of these cultures and could lead to chaos so it gets swept under the rug by many governments around the world. I would like to share in this post some more information on Child Marriage around the world as I consider donating any proceeds from the small online Charity Boutique I started a year and that barely sold 5 items in one year!

I am hoping to sell at least 20 items and donate maybe just $200 to Girls Not Brides (http://www.girlsnotbrides.org), a wonderful organization that sheds the light on this issue and works hard to keep girls in school. Staying in school was the ultimate thing that saved me from being a bride at 8 years old and I am hoping to be able to provide a helping hand for other girls living with the fear I lived with when a hug is too hard to reach for across the world. Your help is much appreciated. Thank you! 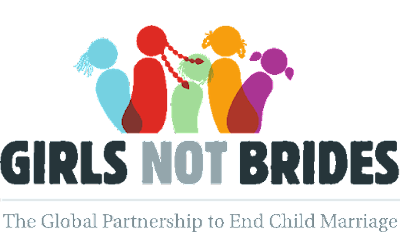 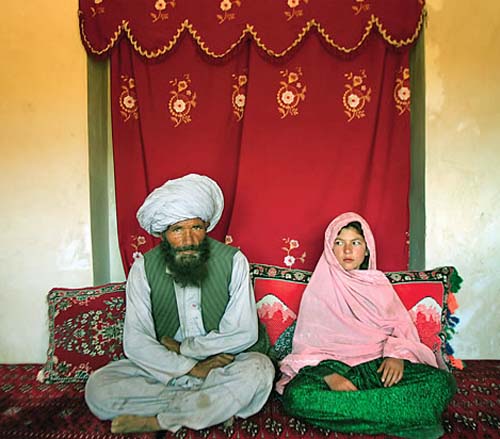 CHILDREN MARRIAGE AROUND THE WORLD

Children  marriage a curse for millions of girls A girl under the age of 18 is married every three seconds -- that's 10 million each year -- often without her consent and sometimes to a much older man, according to the children's charity Plan UK.

Most of those marriages take place in Africa, the Middle East or South Asia.
"This is one of the biggest development issues of our time and we're committed to raising the voices of millions of girls married against their will," Plan UK head Marie Staunton said in her introduction to "Breaking Vows," a recent global report on child marriage. From horrific childbirth injuries to the secret sale of "drought brides," the consequences of child marriage are explored in a multimedia documentary by TrustLaw, a legal news service run by Thomson Reuters Foundation (childmarriage.trust.org).

"Young children have babies -- your life is ruined, your education is ruined," said Kanta Devi, who was 16 when she married in Badakakahera village in India's Rajasthan state.


"You become upset with everything in your life," she told TrustLaw. The U.N. Convention on the Rights of the Child considers marriage before the age of 18 a human rights violation. But according to the International Center for Research on Women (ICRW), there are more than 50 million child brides worldwide, a number that is expected to grow to 100 million over the next decade.


Rights activists say six of the eight U.N. Millennium Development Goals to be achieved by 2015 are directly affected by the prevalence of child marriage -- the eradication of extreme poverty and hunger; achievement of universal primary education; promotion of gender equality and empowerment of women; reduction in child mortality; improvement in maternal health; and combating HIV/AIDS, malaria and other diseases.

The ripple effect is devastating, experts say. Girls forced into early marriage rarely continue their education, denying them any hope of independence, the ability to earn a livelihood or of making an economic contribution to their households.

The practice also reinforces the concept of girls as worthless burdens on their families to be jettisoned as soon as possible.

Girls who complete secondary school are six times less likely to become child brides than contemporaries with less or no education, according to the ICRW, a Washington-based think tank. But distance from schools and a lack of school fees often preclude education for the poorest girls, who are twice as likely to marry young as those from wealthier homes. 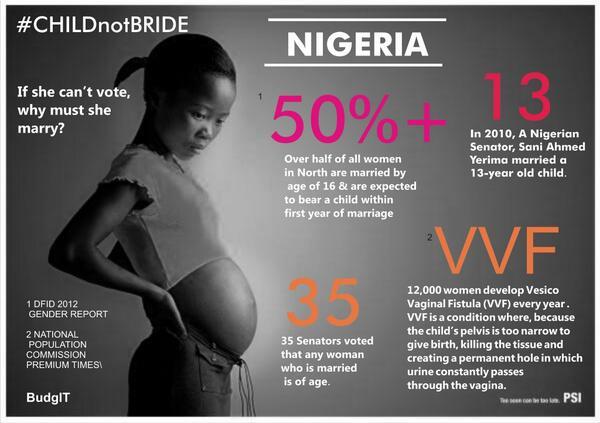 In Niger, Chad and Mali, more than 70 percent of girls are married before the age of 18, according to ICRW analysis of demographic and health data last year. Bangladesh, Guinea, Central African Republic, Mozambique, Burkina Faso and Nepal have child marriage rates over 50 percent, the data showed. Ethiopia, Malawi, Madagascar, Sierra Leone, Cameroon, Eritrea, Uganda, India, Nicaragua, Zambia and Tanzania are all above 40 percent.

The reasons child marriages occur vary with the country and are rarely simple. "Very often people are sort of quick to demonise, in some ways, the family members and the people who make the decisions about the marriage of girls," Jeffrey Edmeades, a social demographer with ICRW, told TrustLaw. 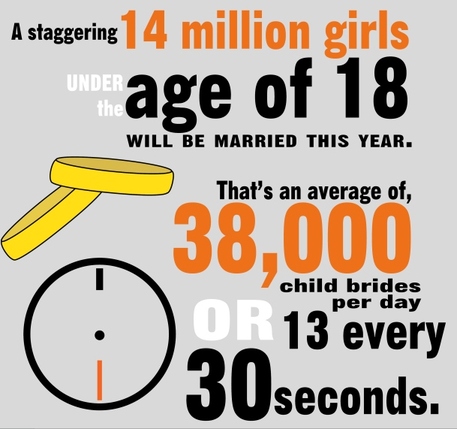 "But we're finding, for the most part, that people are making these decisions because they feel it's best for their daughters. Parents love their children and they do want the best for them. They're just not sure what the best is."

Edmeades, who has been working with aid agency CARE on a project to tackle child marriage in Ethiopia, gave the example of children in that country being betrothed before birth to cement strategic alliances between families. In other cases, girls are married off early to ensure that their virginity, and thus their economic value as brides, is intact and the honor of the family is protected. Meanwhile, debts and natural disasters, such as tsunamis and drought, can lead to girls being sold off as brides as families scramble for survival. 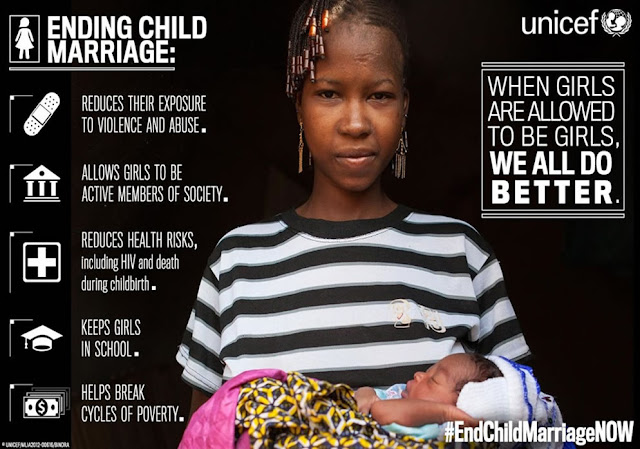 Girls under 15, their bodies still developing and their pelvises narrow, are five times more likely to die during pregnancy or childbirth than women over 20, the U.S. Agency for International Development estimates.

The vast majority of those deaths are in the developing world, where a lack of pre- and post-natal care and advanced procedures such as Cesarean sections makes pregnancy and childbirth far more risky than in rich countries.

In Africa, for example, 60 percent of women and girls give birth without a skilled medical professional present, according to the U.N. World Population Fund. Worldwide, 70,000 girls aged 15-19 die each year during pregnancy or childbirth, UNICEF says. The U.N. World Population Fund considers pregnancy the leading cause of death in that age group, citing complications of childbirth and unsafe abortions as major factors. Children of child brides are also at risk. Babies born to mothers younger than 18 are more likely to be underweight or stillborn, Plan UK says. 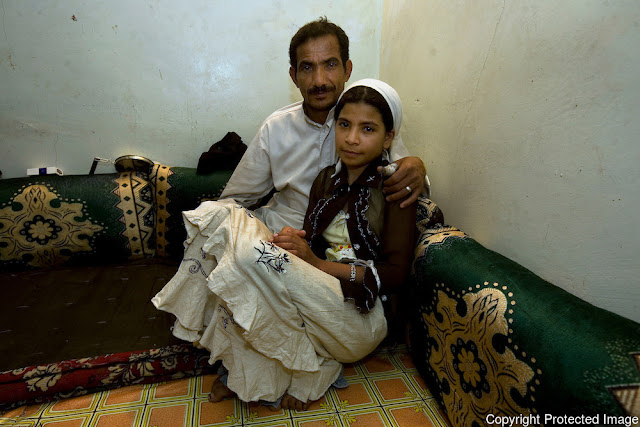 Girls forced into early marriage are also at an increased risk of contracting sexually transmitted diseases and HIV/AIDS because they are unlikely to be able to negotiate safe sex with their husbands. "Child marriage is a silent health emergency in the sense that it's often overlooked as a root cause of maternal mortality and morbidity (illness)," the ICRW's Edmeades said.

While it is a subject still little known and rarely discussed in much of the Western world, the issue of child marriage is drawing greater attention from international aid and humanitarian organizations, as well as governments.

In the United States, where child marriage is rare, the U.S. Senate has reintroduced legislation aimed at curbing global child marriage that was unanimously passed in the Senate in 2010 but blocked in the House of Representatives. The International Protecting Girls by Preventing Child Marriage Act would establish a strategy over several years to prevent child marriage in developing countries.

It would also require the State Department to report on child marriage in its annual human rights report and integrate efforts to prevent the practice into current development programs. The bill will be reintroduced in the House this autumn, according to Betty McCollum, a Democrat representative from Minnesota, who is its lead sponsor there. 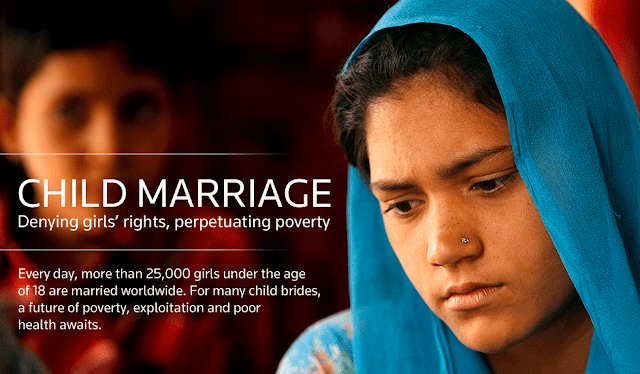 It was blocked in the House last December primarily due to Republican concerns that it would help organizations supplying abortions, which "couldn't have been farther from the truth," McCollum told TrustLaw. "It has nothing to do with abortion," she said. "It has everything to do with saving 12-year-old girls from being sold into slavery or sold to settle a family debt." Not only will it make aid dollars more effective, she added, but "it's a win for the child, it's a win for the community the child lives in and it's a win for the international community."

The Elders, an influential group of global leaders founded in 2007 by former South African President Nelson Mandela, gathered dozens of organizations for a two-day meeting in Ethiopia in June and have launched a campaign called "Girls Not Brides: the Global Partnership to End Child Marriage." 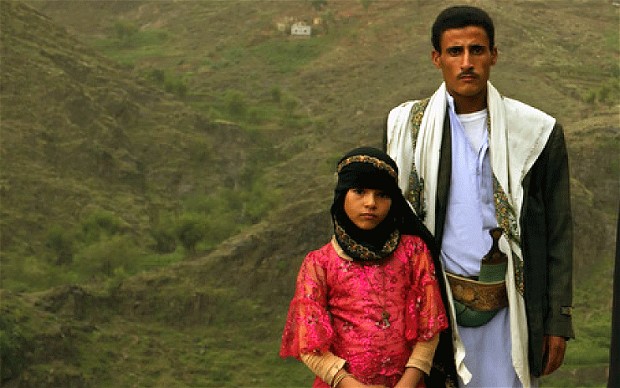