Salma Hayek as a belly dancer! 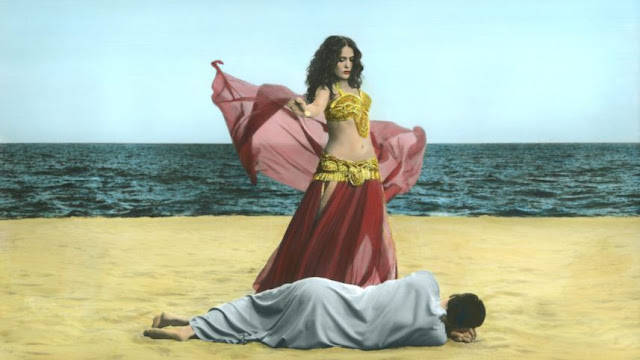 Hayak as an Egyptian belly dancer in another of Nabil's works. In interviews, the artist has expressed longings for Egypt as it was in the past.Courtesy of Youssef Nabil / Galerie Nathalie Obadia
read more: http://www.haaretz.com/israel-news/culture/.premium-1.689278


Anyone entering the Nathalie Obadia gallery in Paris in the past month will probably have been surprised to see a video of movie star and high-society woman Salma Hayek wiggling her buttocks, dressed as a belly dancer. The 12-minute film is part of an exhibition by Egyptian artist Youssef Nabil, entitled “I Saved My Belly Dancer,” which also features 26 hand-colored photographs, based on images from the film. The show is on through January 6, 2016.

Starring in the video with Hayek is French-Algerian actor Tahar Rahim who plays Nabil, sleeping on the beach, dreaming that his magnificent Egypt is gradually disappearing and that the last remaining belly dancer is dancing a final dance for him, before he takes her into the wilderness of the American dream.
This is not the first time Nabil has chosen to work with international stars and celebrities in his photographic work. Singers including Sting, Alicia Keys and Natacha Atlas, Serbian installation artist Marina Abramovic, Iranian artist Shirin Neshat, American photographer Nan Goldin, Spanish actress Rossy da Palma, Egyptian actress Faten Hamama, as well as stars Catherine Deneuve, Isabella Rossellini and Omar Sharif – all these and many others have served as his subjects. In his first short film, “You Never Left,” which he wrote, directed and produced in 2010, Fanny Ardant starred alongside Rahim.

Nabil’s attraction to the big stars is no coincidence, of course. This attraction, as well as his work techniques, are related to the content which he often deals with, related to longings for the past and for a world that no longer exists and which may never have existed – except in the movies.
While still living in Egypt years ago, Nabil was singled out by British artist Tracy Ameen as a promising creative talent, and today many people consider him to be an extremely skilled and interesting photographer. His works have been displayed in group shows along with those of leading artists in the Arab world, Africa, Europe, the United States and Mexico. He has had solo exhibitions in such highly regarded venues as the Townhouse Gallery of Contemporary Art in Cairo, Galerist in Istanbul, Villa Medici in Rome, Maison Européenne in Paris, and a number of public institutions – including the Victoria and Albert Museum, the British Museum, Centro de la Imagen in Mexico and others – display his works on a permanent basis.
In many of his works, Nabil places the subjects of his photography – whether it is he himself, his friends or celebrities – in settings that are unrelated to their public persona, as people cut off from their safe and familiar world and even from reality itself. By means of the purity of the picture, the meticulous and polished coloring used for both the background and the photographed figures, Nabil ostensibly removes all the stains of reality, the small specks of dirt that scratch images in everyday life, and dedicates himself to the dimension of illusion, which is embodied in cinema itself, as well as to nostalgia.