Underbelly: a year in the life of a dancer by Princess Farhana

By T
/ in Belly talk Reviews 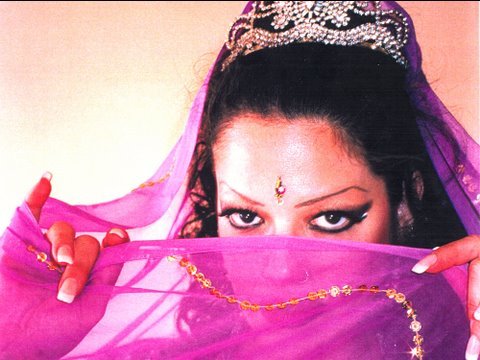 Sometimes we need a solid reminder of why we dance ... what it brings to our lives and how we got hooked in the first place! 'Underbelly,' a new documentary by Steve Balderson of Dikenga Films not only helps us refocus on our love of dance, but gives us food for thought as well. The documentary is a year in the life of Princess Farhana (Pleasant Gehman). The Princess has had no 'ordinary' life and therefore this is no ordinary movie: it s not your momma s belly dance! (and yes, there s adult content) Her career spans from her Punk Rock girl band days in the 80 s, where she booked clubs in Los Angeles and was known as almost a 'mythical' person; to her belly dance career of 16 years where she has starred at Hollywood's Moun of Tunis; to her burlesque career of 12 years. And while the documentary focuses on Princess Farhana, it also gives us extra insight into the history of belly dance, the evolution of different dance styles, and why so many dancers are drawn to this beautiful art form. The movie follows the Princess through workshops across the US, in Canada and England, as well as on a belly dance cruise to Mexico. We follow her in her travels, watch her teaching classes, and accompany her to rehearsals and backstage where we re allowed to watch and listen to her interactions with other dancers. This gives us a real feel for the kind of instructor and performer she is ... as well as an appreciation for her sense of humor! The interviews and conversations with Princess Farhana are supplemented by interviews with other dancers and performers who talk about her fun, down-to-earth teaching style and her beautiful performances. The Princess is obviously a well-respected, beloved member of our belly dance scene with her classical oriental dance style. In fact, she was the 2006 winner of Zaghareet Magazine s Golden Belly award for Favorite Cabaret/Oriental Dancer. And since she s often included in many tribal and fusion events across the country, that speaks for her diversity as a performer. The many wonderful interviews with other performers are a really strong part of the documentary. The interviews are very candid, opinionated and UNCENSORED which means they are also very personal and we feel as if the performers are really sharing their feelings with us. Some of the names are those that we have come to know as authorities in our field such as Tonya & Atlantis, Suzy Evans, Marta Schill, John Compton and Kajira Djoumahna, just to name a few. There are also interviews and dance clips of many other performers such as Rachel Brice, Jim Boz, Tempest, Rachel Lazarus Soto, Margaret Cho, Lee Ali and other dancers that all have their own personal views to offer. We learn a lot about why they started dancing, and their personal feelings about the dance as well as about themselves. We get into issues such as the Goddess within, satisfaction with your own body, the life changing experience of dance, the feeling of power as a woman, and how dance celebrates your body. There are so many experiences shared in this movie many make us laugh and some might bring tears to our eyes but all together they manage to reinforce our own feelings about dance! The many dance clips presented in the documentary give us a chance to see performers that we might not have had a chance to see before and also give us a glimpse into how many different personal interpretations there can be in our dance form. In fact, I would have liked to have seen even more performances, but that probably would have added an extra hour to this already 95 minute production! There are discussions (both pro and con) of male belly dancers, different dance styles, and the more recent controversy of burlesque as it relates to belly dancers. The opinions are gutsy and honest, and we re given a lot of personal insight into the ... --ZAGHAREET MAGAZINE (print magazine Jan 2008 issue) 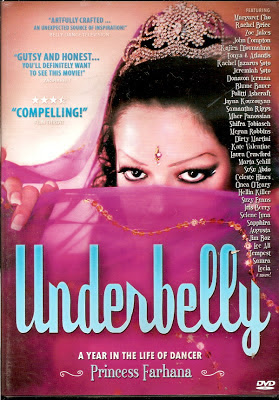 Belly Dancing. It evokes a mental image of sitting in some dark underground club in Karachi, chewing khat while watching Theda Bara gyrate to some exotic variation of 'Streets of Cairo.' her piercing eyes darkened with kohl, wearing the traditional Bedlah: Coin bra, face veil, beaded dress. The smoke filled air smells of opium, shady goings on in every corner, Mata Hari whispering secrets in your ear... It s literally the world s oldest form of dance, certainly one of the most pleasurable to watch (at least I think so) and probably the most fulfilling to learn (although probably not for me, since I don't have the hips). So it deserves a good documentary and Steve Balderson s 'Underbelly' delivers. Taking cues from other low key docs that immerse you in the world that they re documenting rather than annoyingly try to teach you the specifics of the subject point by point as if there s a test after, Balderson is an unbiased invisible presence throughout. His camera is everywhere: capturing moments, serving as a confessional, recording thoughts, but never intruding. We go from the fundamentals and history of the dance, to how it s taught, to what shows look like, to discussions about the differences between the purely traditional style and the fusion of more modern styles such as burlesque. I can't tell you how nice it is to watch a documentary that, you know, DOCUMENTS instead of serving as a soapbox for the filmmaker's own views. This isn't a movie about Steve Balderson (although that would be an interesting one) it s about the ever evolving world of Belly Dancing in general and Pleasant Gehman in particular. Pleasant Gehman, who dances under the name of Princess Farhana, is definitely an interesting person. She s a survivor of the 80's L.A. punk scene. Normally, this would be a rather frightening proposition since so many of the old school punkers are fruit loop incoherent basket cases with all the memory of Leonard Shelby and the mental acuity of Algernon. However, you ll be glad to know that Gehman isn't like that at all, but instead an energetic, intelligent and observant woman. She s awesome! Gehman also embodies my favorite qualities in women in that she s smart, funny, at ease with herself and just seems to enjoy life. She s the type of person who not only has the presence of mind to recognize when interesting things happen to her, but who also has the vocabulary to describe these things in an interesting way afterwards. That's a very rare combination. I know people who could hunt vampires for a living and make it sound more boring than sitting through a Ben Stein lecture on income tax revisions. Pleasant Gehman, on the other hand, knows how to make every story she tells come to vivid life. Likewise, Balderson's visual storytelling expertise comes into play here and he assembles all the interviews and footage in such a way that you're never bored and never tired of the subject. That s a good thing too, since I literally loathe the act of dancing. I'm sorry, but I do. I don't like loud music, I don't like to be in front of people and I don't like to move when I don't have to. Yet, even I found Underbelly interesting and engaging. Not only did it explain belly dancing to me, but also dancing as a whole. The way I see it now, Belly Dancing's legend, long history and sense of timelessness is its appeal. You can't fake these women's (and men's, because yes men bellydance too.) love of what they do. They're part of something bigger than themselves and they show it reverence. It's not just about dancing, it's not just about amusing a crowd; it's about continuing a tradition or taking that tradition and recreating it to suit your own personality. It's a living art. So even though I may not like dancing, I understand it now. The funniest parts of the documentary have to do with... --Film Threat