By T
/ in Belly talk Reviews 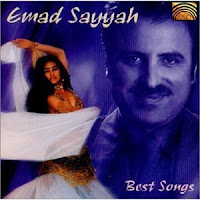 Emad Sayyah was born in Beirut, in 1954. He studied business administration and music there. During his studies he made a name for himself by singing, writing and producing music in many different languages and styles. Emad Sayyah has been performing as a professional singer for over 20 years. His concerts have taken him to many countries and apart from his home country Lebanon, he has performed in Kuwait, Jordan, Syria and Bahrain as well as Germany, Austria, Switzerland and the Netherlands. Emad has lived in Vienna, Austria since 1978
Besides using traditional oriental instruments like the derbacki (hand drum), rik (Riqq, tambourine), kanoun (qanun, zither/psaltery of the middle east), nay (flute) and santur (dulcimer).

Emad Sayyah also utilises modern instruments like the saxophone, oboe, clarinet, accordion, keyboards and the violin. He writes soft and harmonic arrangements avoiding quarter tones to create a new and modern sound with easily accessible melodies and rhythms, which facilate and enhance movement of the body and expession in the dance.