Said Mrad: the Guru and pioneer of the Arabian electronic dance music 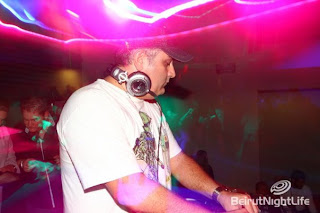 SAID MRAD is a music lover, who eats sleeps and consumes music, born in Lebanon, his career in the music scene dates back to 1990 when he first started as a DJ playing in some of the most respected nightclubs around Lebanon such as JET SET, OPERA, and GOTHA.

Through the years, he acquired an admirable sense for music and became well known and respected as "one of the best DJ’s and the Guru of Arabian electronic Dance music from the middle east region".

In 2001 Said produced his legendary debut album "2001 nights", It was released in the Middle East in April 2001 and as a result of its huge success the album 2001 nights was named one of the best selling Arabic albums ever released in the region. The single Alf Wa Layla (1001 Nights) backed with a very cool video was the massive smash of the year 2001, the track was virtually played everywhere from clubs to Radio to TV. This was the defining stage in the Arabian Dance music history!
This massive success resulted in getting major interest from the major record company UNIVERSAL Music group to sign SAID MRAD. Universal released this album in June 2002 in France where it entered the national top 100 best selling album in FRANCE!
Further success achieved was that the album reached number 34 in the top 100 best selling albums the same year.

The huge success made SAID MRAD release another album in 2002 titled “SAID MRAD PLAYS BALIGH HAMDI" This too was a huge success making it one of the best selling albums in the Middle East. The success of his second album made another major record label to show interest and as a result WARNER Music Group signed the second album and released the album in Europe in the summer of 2002 with another success catapulting Said as one of the major Artist from the Middle East.
In 2003 Said released his 3rd album "another 1001 nights" and was named best selling album in 2004. Due to the significant success in Europe, the two companies launched his album worldwide and since, Said has been touring the globe with many sold out headliner events.

Said has released further albums including a collaboration album named 1001 nights society in 2005, Esmerin in 2006 and his latest masterpiece in 2009 “ElectrOriental”. All of these albums have followed suit and have been very successful to date.
Following his success all over the middle east and the rest of the world,Sony music along with Shakira’s management collaborated with Said on a remix for Shakira’s new single “She Wolf”
And released it on her album entitled “she Wolf” as well as a maxi single in the markets.
Following the huge success of the remix,Shakira’s management and sony music decided
To release the remix as a video clip also.

Said has played in several renown clubs in Europe, including "MILLENIUM in MARSEILLE","BUDHA-BAR,BARIO LATINO,NIRVANA LOUNGE in PARIS, COLONIAL in THESSALONIKI-GREECE, PRIVATE BEACH in IBIZA, GURU-BAR in AYIA NAPA, LITTLE BUDDHA-BAR in SHARM EL SHEIKH,SPORTING-CLUB IN MONTE-CARLO, as well as the most renowned clubs in DUBAI, EGYPT, JORDAN,ZURICH and CYPRUS.

You can check out Said Mrad music on and download directly!

Here are the links to the master's wonderful albums