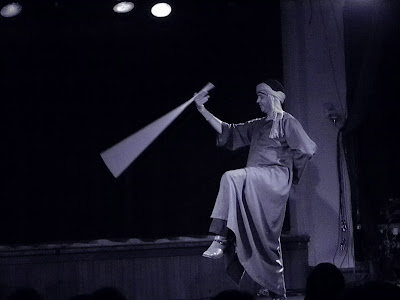 Folk Dance is INCLUSIVE !! It is originally done by "the people" in ritual settings. It is more commonly enjoyed as play, rather than labored as performance. The gender differences are demphasized, and the dance is forgiving of all physical sizes and abilities. Therefore women and men, group or solo, old and young, expert and amateur, foreign and native, can all play together. This DVD introduces 4 folk dance styles from around the Arab world. These dances include DABKE, the stomping line dance from the Eastern Arab world; KHALIJI, the undulating and hair tossing dance from the Arabian Penninsula; SAIDI, the twiring cane dance from Southern Egypt; and Egyptian SUFI, a swaying and turning ritual that invokes bliss and trance. Karim Nagi teaches the steps, gestures, and combinations with extreme detail and educated structure. Each step has an Arabic name, and a cultural context, all explained and demonstrated. Along with two female dancers Aubre and Lauren, Karim presents all the lessons, plus 6 choreographies that can be performed by any size group. 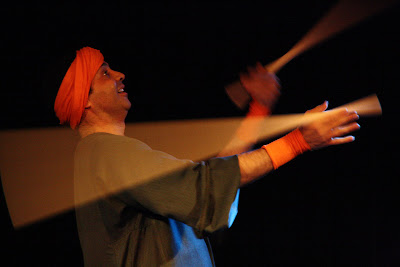 DABKE is a line and formation dance found in Lebanon, Syria, Jordan, Palestine, and Iraq (under the name Chobie). The dance is a proud, communal dance done at weddings, parties, theatrical plays, and even social protests. The movements consist largely of walking steps, leaning, jumping, feet shuffling, kicks and unison stomps.

KHALIJI refers to Arab dances from the Arabian Peninsula and Persian Gulf (Saudi Arabia, Kuwait, Yemen, Oman, Qatar, UAE and Bahrain). The movements have some African and Indian traits due to geographic interaction, yet the core is definitively Arab. The movements consist of limping steps, shoulder pulses, various hand vibrations, swaying, turning, and hair twirling.

SAIDI refers to dances and music from Southern Egypt (aka Upper Egypt). This style is famous for the use of a cane or stick, and is often called Raqs Assaya (cane dance) which is an offshoot of the martial art "Tahteeb". The movements consist of legs swoops & hops, cane rowing, cane spinning, cane flipping, cane striking, and mock battle.

SUFI refers to a branch of Islam that often utilizes movement and song to augment prayer and to induce bliss or trance. Egyptian Sufi dance includes a ritual called "Zikr" (remembrance) which can be seen at the big "Mulid" birthday festivals for a famous historic Muslim "Wali". The movements consist of swaying, bobbing, rotating, and spinning. 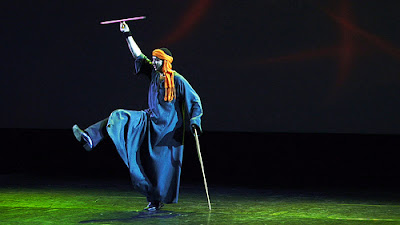 KARIM NAGI is a native Egyptian, and a primary source for the music and dance of his Arab culture. He studied the dance and music of the Arab world exclusively from natives, in apprentice, academic, and immersion settings. He was a faculty member of the New England Conservatory, and has taught master classes and lectures at universities and colleges, including Harvard, Yale, Princeton, NYU and William & Mary. Karim has also performed and taught at most of the major Arab Culture, Middle Eastern Dance, and Tribal Dance festivals in the USA. He performed and taught in Europe, Asia, South America, as well as prestigious venues and TV shows in Egypt. He has authored instructional DVDs for drumming, maqam & taqsim for dancers, 2 rhythm compilation CDs, and 4 original music CDs under the name Turbo Tabla. He is the leader of the Sharq Ensemble, Arab Dance Seminar, and the Arabiqa public school program. Karim Nagi is a traditional performer, who also embraces modern approaches and original material, and is keen to help non-Arabs learn and perform his tradition. - www.karimnagi.com
Purchase the DVD online