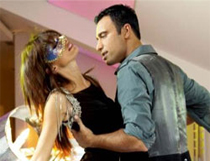 Mustafa Sandal, commonly known as Musti, is a famous Turkish pop singer. He is fluent in English, Turkish, Italian and French. He emerged in the early 1990s with the revival of Turkish pop music  and is one of the most successful pop singers in Turkey with overall sales of 13 million copies. Musti is famous in Europe for his songs "Moonlight", "Araba" and "İsyankar" in countries such as Germany, Belgium Switzerland,[1]  and Austria.[2]  He is also known in the United States, Russia, Azerbaijan and Uzbekistan.

I actually did a little workout routine to this one before. Check it out here